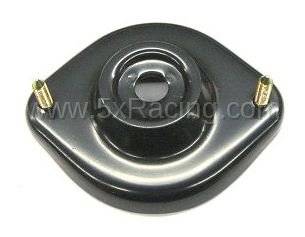 New
10312608
The price listed is for one top hat mount, with no hardware. You can add hardware for one corner or for an entire kit for all four corners, , please choose "entire upgrade kit" from the dropdown list.

1999+ Miata upper shock mounts were made popular by Spec Miata racers utilizing 1990-1997 Miata's as the 1999+ Miata shock mount is far superior in design than the earlier (90-97) mounts. 1999-2005 Miata shock mounts are desirable because Mazda revised the shock hat configuration in 1999. The redesigned shock hats are taller than the 90-97 style shock hats, which brings the physical location of the shock higher, effectively allowing the ride height to be lowered further than before with the same amount of shock travel, without negatively effecting suspension geometry. It definitely helps handling by lowering the center of gravity on your Miata, and is a necessary upgrade when using the Fat Cat Motorsports bump stop kit.